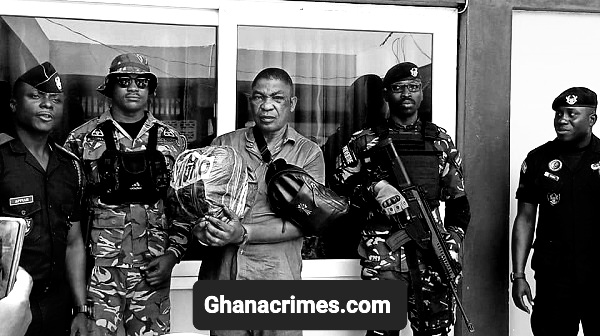 Aremu Timothy Adegboyega, a 56-year-old Nigerian, was detained for allegedly smuggling millions of suspected counterfeit CFA and naira. On Tuesday, January 17, 2023, the suspect was stopped when he attempted to enter the nation from the Republic of Togo via Beat Zero.

Ahmed Majeed Amandi, assistant commissioner of the customs division of the Ghana Revenue Authority (GRA), Aflao Division, claims that the suspect was discovered by joint security men who were on duty along the illegal route. He claimed that when detectives searched the suspect’s luggage, they discovered brand-new notes totaling CFA80,000,000 as well as CFA843,000.00 and 110,500.00 Naira in his waist bag.

According to reports, the currencies share a serial number, which led the cops to decide to detain the traveler so they could question him more. Timothy Adegboyega admitted to carrying “fake” money when he was questioned, and this was his second instance of doing so. He admitted to the police that his friend, who resides in Lagos, Nigeria, had given him money for this trip to present to a customer named Mallam Isumaru Jeru in Abobo, Ivory Coast.

According to Majeed Amandi, the Bank of Ghana will examine the money to determine whether it is real or false. The suspect is currently in the Customs Division’s custody in Aflao and is anticipated to be transferred to the main office in Accra for additional questioning and prosecution.